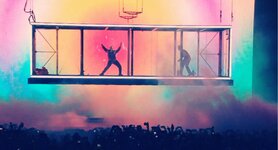 Background: the long awaited collaboratory album between kanye west and kid cudi finally landed on june 8, 2018. in a series of tweets earlier in that summer, kanye announced this project alongside others like his solo project ye, pusha t's Daytona, nas' Nasir, and teyana taylor's KTSE. much like the other G.O.O.D. Music projects released in the summer of 2018, KIDS SEE GHOSTS is brief, yet very potent. this album is a sort of culmination of all of the back and forth contributions that the two featured artists have made to eachother throughout their careers. the projects major theme is mental health, which has been a struggle for both artists throughout their career. some would say that struggles with mental health directly cause kid cudi's falloff in the middle of the last decade. some would say that those same struggles are what made kanye's career, given that the struggles that inspired 808s and Heartbreak directly led to the actions which inspired MBDTF, which many regard as Kanye's best album and the start of the second wind of his career. despite their differing experiences, kanye and cudi teamed up on this project and gave us the cohesive body of work that we had no idea that we needed. included in the short runtime of the album are samples from kurt cobain's Burn the Rain and louis prima's What Will Santa Claus Say?, as well as instrumentals that can be tracked all the way back to the TLOP era on the track Reborn. no matter what you think of kanye or cudi, the work on this album speaks for itself.

1. Feel The Love (feat. Pusha T)
- i vividly remember listening to this album for the first time on my way to work the morning after its release. the sinister instrumental on this track comes in slow, contrasting against cudi's high energy vocals on the intro. this is followed by a solid, confident verse from pusha t. i would like you to imagine me at 5am, driving to work with the volume of the sound system in my car turned up almost all the way in an attempt to wake myself up from the lack of sleep that i got in anticipation of this album's release. i would then like you to imagine me nearly swerving off the belt parkway and killing myself as kanye comes in with loud, gunshot-esque vocals. from that moment on, this track's energy was made very clear to me. had the near death experience i had not woken me up, the energy on this track certainly would have. a very eye-opening way to start the album, no doubt in my mind.
9/10

2. Fire
- the instrumental on this track is extremely well produced. the percussion is driving, and in a way it sounds like a psychedelic take on a guitar riff from a cowboy western movie. the track features verses from kanye and cudi essentially saying how they've taken control of their lives back from their demons. cudi's background harmonies help to create a dark atmosphere on the track, and the confidence that we saw on the first track bleeds heavily into this one. both men speak on their past struggles, as well as how their faith and hard work have returned them to places where they once again sit in the upper echelon of hip-hop where they made their name. great follow up, and definitely a track where both artists proved that they still got it to anyone that had doubted them. a powerful proclamation of control from two men who greatly struggled with that issue throughout their careers.
9.5/10

3. 4th Dimension (feat. Louis Prima)
- needless to say that i was nothing short of confused when i heard the intro to this track. nothing could have prepared me for kanye to sample a christmas song, and i'm very lucky that i didn't almost kill myself a second time as i picked my phone up to check to see if apple music had for some reason shuffled itself off of the album. i was then alerted to the fact that i was indeed on the right song by the sudden sound of driving drums and bass, alongside distorted samples and chants from the original sample of the song. kanye has a rough history of trying to be clever with his bars, but the "if i get locked up, i won't finish the sent-" line was one of the most well executed in his entire discography. his verse was high quality, witty, and raunchy in the best ways possible. mind you, kanye has a rough history of sex bars, but his lines about that here are probably the best executed out of any in his entire career. the ghostly laughs on riff into cudi's verse are chilling, followed up by strong verse from cudi that expands on his refound confidence and acts as a very solid closer to the song.
10/10

4. Freeee (Ghost Town, Pt. 2) [feat. Ty Dolla $ign]
- the confidence that this song exudes is incredible. it's this wonderful mashup of rock, hip-hop, and psychedelic music that make this a great song for many occasions. i've always found this song interesting, personally. for anyone who may not know, Ghost Town was originally intended to be on KSG. in the two weeks leading up to the release of his own album, kanye changed up much of the album and created a lot of what ended up being on ye from scratch. that rehaul also included taking Ghost Town from this project and moving it to his own album. this track is awesome to me because of the confidence that kanye, cudi, and ty have. the intro of the track is very relevant, and all the vocals on this track are perfect examples of the freedom implied by the title. all artists here sound on top of the world. to me, this song is perfect from front to back.
10/10

5. Reborn
- there could not be a more stark contrast between two tracks than there is between Freee and Reborn. instead of the confidence put on display in the previous track, both artists speak on the lack of confidence, struggles, and vulnerability that plagued them as a result of their struggles with their mental health. the instrumental is extremely soft and comforting, as the artists go on about their personal journies in order to affirm to those who may be struggling themselves that they are strong enough to overcome their issues. to me, this song is a sonic representation of a "light at the end of the tunnel". the only thing stopping this song from being a 10 to me is the extended repetition towards the end. there is a lack of contribution from kanye here, but cudi helps to get the softer message across in the same way that kanye gets the wild confidence and energy across on the opener.
9.5/10

6. Kids See Ghosts (feat. Yasiin Bey)
- title tracks are really supposed to fit the theme of the album. this track is a perfect example of what kanye and cudi were going for on this album, and also as a group in the idea of their collaboration. kanye's verse on this song is one of the strongest in his discorgaphy, to the point where it reminds me of the damning commentaries he was making on songs like gorgeous from MBDTF. cudi also had a strong showing on this track, and the outro by yasiin bey (a.k.a. Mos Def) sums up the point of the album very well. it personally reminds me of frank ocean's intro to No Church in the Wild with lines like "that's a king, but what's a crown to the clouds" having a similar effect to "what's a king to a god? what's a god to a non-believer?" although this is probably my least listened to track off of the whole project, the message and musicality are on point and top tier.
9.5/10

7. Cudi Montage
- i'm not quite sure who worked out the details of the Burn the Rain sample here, but it sets the tone of the track extremely well. kanye's verse is lyrically potent, where he elaborates on things like gun violence, the black experience in america, and internal struggle with loss. cudi performs similarly well here; his verse and chorus are haunting, and his chants of "stay strong" inspire a listener who may be personally struggling to dig deep inside themselves to find their inner strength. i feel that this track is the perfect song to wrap up this album.
10/10

Afterthoughts: this project is nothing short of spectacular. although it may be brief, there is not a single song here that merits a score under a 9 on its own. mental health is something that i have personally struggled with throughout my life, and the composition of this project is incredibly moving and powerful. the high points and energy on this project are pure mania, while the contrasting low points are deeply introspective and telling of the struggles that one affected by mental health issues may face. every person's individual human experience is unique; no two of us are the same. however, this project touches on subjects that we all have experience with to varying degrees, and that's part of what makes it so powerful. the production on this project is extremely well done as well, and in contrast to ye, this album feels like it was worked on extensively. the instrumentals fit the messages of each song, and there is not a single weak verse on the entire album. the music here evokes a genuine emotional reaction from me. this project features some of the best writing and production out of both artists' entire discographies, and the result is an extremely powerful project that has stuck with me through thick and thin, and will for years to come. not very frequently do i have such a strong reaction to a given project, but this is also not just any given, run of the mill album. mind you, i did not give every song a perfect score. despite this, each song on the project feeds off of the others to create something greater than the product of the songs by themselves. the whole project is so cohesive, and the way that all of the pieces fit together on this album is the sign of a true masterpiece. i am usually hesitant to call an album a classic, let alone give it a 10. but, seeing the effect that this project has had on me, alongside the incredible maturity and potency of the music that is presented, i have no problem giving this album a perfect score of 10/10.

(feat. andré 3000)
read my shit blogs & reviews !​
Champion
reborn should have been a 10
one of the best albums in the last few years, gonna be regarded as a classic in a decade
Reactions: drago

when you write the review you can give it a 10. i gave it a 9.5 not a 6 there's almost no difference.
Reactions: Lil Uzi

cool man don't read them if you don't like them, i couldn't fucking care less
mr fingers
Reactions: drago
never knew that pusha t was on Feel The Love

Both of my idols never miss.
Reactions: JesusTank and drago
You must log in or register to reply here.