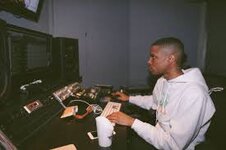 kanye had a manic attack the night of the event. he didn't know what the fuck he was doing, he was in a state of panic.
My favorite artist is literally psychotic and it FUCKING SUCKS i feel so fucking bad for him i want him to take a break.
majority of the day, kanye was in a constant struggle between himself of what songs to put on the record and what features to record and he was just fucking panicking... he was considering putting out welcome to my life on the setlist but he was constantly going back and forth between "if i put this out it will ruin my life" and "if i don't put this out it will ruin my life" and after the event kanye ripped his mask off, and said "fuck it" and had mike dean do shit to the album.

he also had a mental issue before the week started.

it fucking sucks to say but there's literally a chance kanye ends his life this year FUCK it's hard to say that... it's depressing... and YOU ALL know that

IM FREAKING THE F OUT RIGHT NOW WHAT DO WE DO GYS!
Reactions: Phoenixx, BYYOURSIDE, ChinChinox and 231 others
Click to expand...

Active Member
Author
this is so sad can we get 10 sad reactions?
Reactions: 999 Kxrma, o3ru, Spark nigga and 230 others
Front page n all ?
Reactions: Ak74, IW23, vagina and 51 others
Grail
Reactions: leaveeye, ItsUpShyne, darkpen and 34 others
@Matthias Why are you stealing article material and claiming you wrote it??
Reactions: tris star, Jelly, Wonder87 and 14 others
Theres enough folks around ye to check in on him, he has religion to help him through dark times,
as well as friends. i can wait for donda but just release it at least.
Reactions: IW23, Martinxx, NotASenseOfChill and 13 others
who gave this clown an author role?
Reactions: o3ru, Aron5476, cokey and 65 others
dude hasn’t been good in years anyway
Reactions: o3ru, IW23, proveit and 30 others

I’ll be having the staff remove your posting permissions for the day. Seethe.
Reactions: o3ru, Jamalharson2, Ak74 and 25 others
how did u get author, give me it so i can review project x
Reactions: rikTa, Martinxx, tris star and 10 others
And I got denied author role?
Reactions: o3ru, IW23, rikTa and 35 others

go outside &calm down
Last edited: Aug 13, 2021
Reactions: o3ru, IW23, rikTa and 13 others
why is the pic peeair? just cause they’re both black and make beats doesn’t mean they’re the same, although pierre is really good so i understand mistaking him for kanye.
Reactions: o3ru, Mezmure, ItsUpShyne and 13 others
That’s piere
Reactions: o3ru, ItsUpShyne, sexo and 12 others
you're worried about Kanye like it's your father or friend. although in real life Kanye takes a shit on you and I'm sure he would do nothing to help you. we can conclude you are braindead asshole as hell
Reactions: ItsUpShyne, rikTa, bunnyclaw and 11 others
tragic
I think you will kill yourself before he does
Reactions: o3ru, Weiner Balls, NotASenseOfChill and 15 others

brand new whip got no key
Reactions: o3ru and ItsUpShyne
You must log in or register to reply here.

KANYE WEST Looking for someone

Hip-Hop Discussion Today at 2:03 AM
obvs